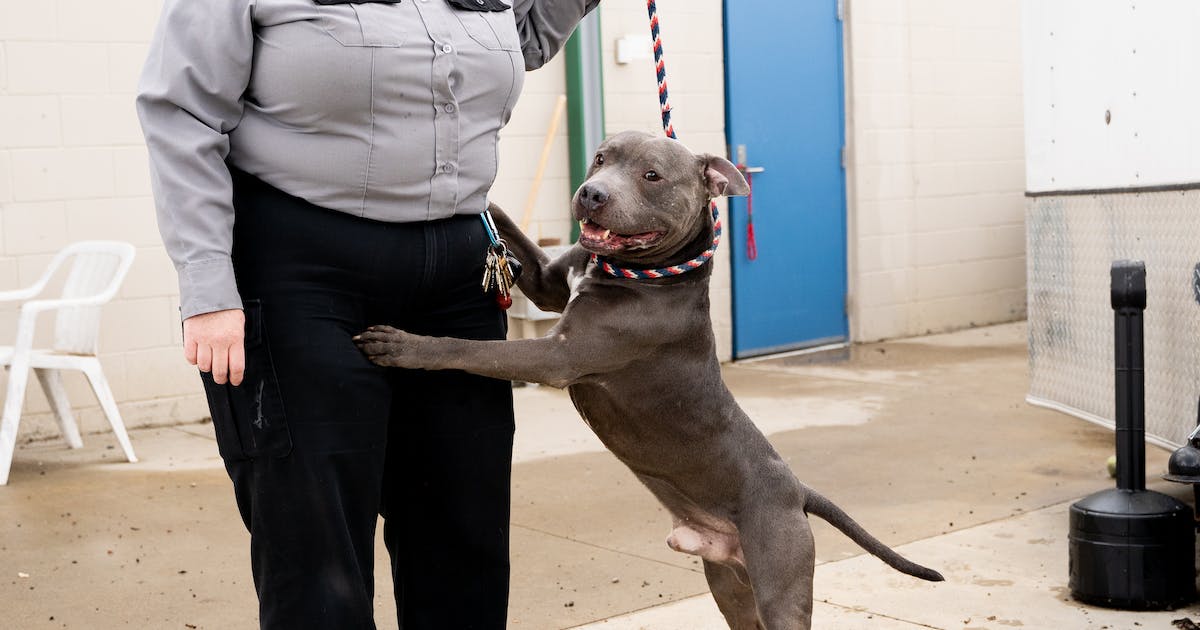 Not your dad’s dog catchers: St. Paul Animal Control reunites most pets with their owners — or finds new homes

Molly Lunaris was working as a teacher in Washington, DC when she made a pivotal career discovery: She felt a greater passion for a summer job in animal control than for teaching.

So when an opportunity presented itself for the Richfield native to return to Minnesota and get a job with St. Paul Animal Control, she took it. It was 13 years ago. Now, Lunaris is in charge of the department’s Field Services and Shelter programs.

Animal Control provides care for more than 2,000 dogs, cats and other critters at the city shelter each year. Lunaris recently sat down with Eye On St. Paul to chat about dogs, cats, maybe a chicken or two, as well as share a few things you might not know about owning a pet in St. Paul.

This interview has been edited for length.

Q: How many animals do you have in the shelter at a time?

A: It’s really hard to say. It fluctuates so much with the seasons. In January when it’s cold, all the dogs hide inside the house and the cats too. We could have somewhere in the 10-15 range. And then around the summer, it’s not unusual for us to have maybe 50 animals here at a time.

Q: What is the main reason you have animals at the shelter?

A: Usually it’s because an animal got lost and got into trouble. In town, we don’t have packs of running dogs or anything like that. Thus, the animals we take in are often separated from their owners in one way or another, either accidentally or, sometimes, intentionally. We also receive a good number of animals whose owner is in some kind of crisis – if they have been hospitalized or arrested and can no longer maintain this bond with the animal. Depending on the situation, we sometimes work on the reunification and sometimes on the rehousing of this animal.

Q: How long will you keep an animal before having to euthanize it or send it somewhere else?

A: We have no time limit in this regard. We have kept animals here at the shelter for months. [State law requires holding a lost animal for at least five business days before release. After the holding period is over, animals may be released to animal rescue organizations.]

Q: Are you open seven days a week?

A: No. We are open Monday to Friday. In reality, it is seven days. Eight public holidays. We had an abandoned pet three weeks ago and he is going into foster care today.

Q: Do you have relationships with host organizations?

A: When we are unable to reunite an animal with its owner, we seek to reintegrate it in some way. We’re a small organization, so rather than trying to do adoption, which takes staff, public hours, and marketing, we really focus on our relationships with nonprofits. The main ones we work with are the Animal Humane Society [and] small non-profit organizations that do foster rescue. We probably have 25 in our network.

We have been able to scale our programs to the point where we really only euthanize 5-6% of the animals that come in. the target for shelters that claim to be non-killers is 90%.

Q: So do you either go back to the owner or adopt almost every pet you get?

A: Or take them to another shelter.

Q: Why are your numbers so strong?

A: This is what the rate is for the Twin Towns in general. Minnesota is just a wonderful rescue community that really wants to help animals. It really allows shelters that are small like this or have limited resources to really grow their numbers.

Q: What types of animals do you currently have in the shelter?

A: We are above all dogs and cats. On top of that, we have a pet rabbit hanging out outside my office. We also have roosters here. Most of the time I would say we have a handful of roosters in our building.

This year, we welcomed a lamb and a kid. The goat was seized. [The owners] couldn’t care less. The lamb was found wandering. She was quite sick [and had to be euthanized]. But she spent a good two weeks being pampered by the vet.

Q: How many officers do you have?

A: Right now, I have three animal services officers. And we’re staffed with five people, so we have a few open positions that we’re working to hire. We are on call 24 hours a day. If there’s an animal emergency in the middle of the night, we’re called out of bed.

Q: If people let their cats out of the house, are they breaking the law?

A: Not in Saint Paul. St. Paul does not require cat owners to purchase a license for their cat, although dog owners are required to do so. We ask people to be respectful and if they choose to have an indoor/outdoor cat beware of neighbors who might not want them digging in their vegetable patch. We always encourage people to keep their pets indoors whenever they can.

Where Science, Faith, and Intention Meet” is an engaging discussion on how to balance science and faith