We all know them by sight. Fluffy with flat little faces that millions of cat lovers around the world can’t resist. That’s right, we are talking about Persian cats!

I have never owned a Persian cat, but I have had the opportunity to meet a few in my life. I always thought they were eloquent little beings with pure skin. As gentle as they are sweet, these docile kittens are high-maintenance, but with the amount of love and affection they provide, their owners don’t seem to care at all.

Check out this perfect collection of fun facts about Persian cats… They are among the oldest cat breeds in existence.

Although Persian cats have been around for, you guessed it, the time when the land once known as “Persia” was Persia, these cats were bred to have a short face, snub nose, round head, chubby cheeks with a small body size. Over time, these features became more pronounced. The Persian cats we know today have no specific origins, but their lineage dates back to the 1600s.

Want to know a fun little fact you probably didn’t know about Persian cats? Until the end of the 19th century, all long-haired cats from Turkey, Persia and Afghanistan were simply called “Asiatic” cats and were often kept together. Beloved by many, including historical figures throughout history

These luxurious cats regularly top the list of favorite cat breeds in the United States and the United Kingdom. Founder of Modern Nursing Florence Nightingale Owned Up to 60 Persian Cats in Her Lifetimeeven taking 17 at a time! Rumor has it that a large Persian cat by the name of Bismarck was his favorite among his crowd of cats.

Screen legend Marilyn Monroe was a Persian cat loverand she kept a white one for years named Mitsou. Author Raymond Chandler read his first drafts to his black Persian cat named Taki, whom he considered his toughest critic.

Housewife mogul Martha Stewart is an avid fan of the breed and even has a section on her website dedicated specifically to her beloved feline friends. Watch this video below where you discuss specific care tips for these kitties of the feline world:

What pretty colors you have!

Although Fancy Feast advertising has tricked our minds into thinking that Persian cats are silver-white, in reality that is not the case. Persian cats have a wide variety of coat patterns and colors. Some of them include: tortoiseshell, tuxedo, calico, plain and even tabby designs. 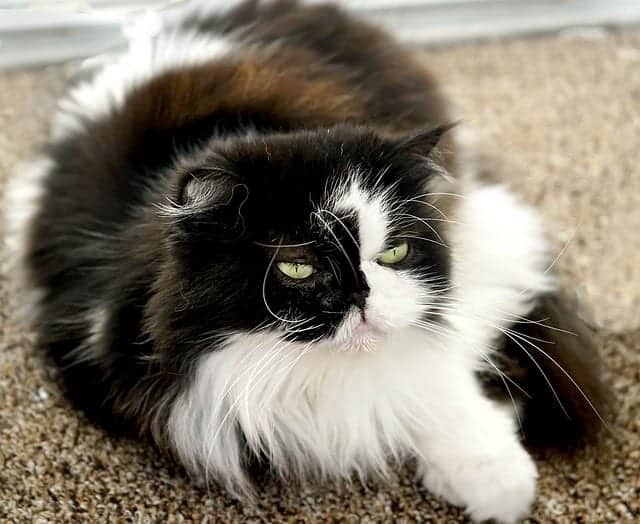 One of the most popular varieties of the Persian cat breed comes in the Himalayan form. According to the Cat Fanciers’ Association, “the Himalayas are depicted in the following colors: chocolate, seal, lilac, blue, red, cream scale, blue-cream, chocolate scale, lilac-cream, seal lynx, blue lynx, red lynx, cream lynx, tortoiseshell lynx, blue-cream lynx, chocolate lynx, lilac lynx, chocolate scale lynx and lilac-cream lynx Color is limited to the face mask and extremities with the body in various shades of white to fawn.

While many Persian cat fanciers have come to adore this fluffy cat breed, their appearance differs greatly from how Persian cats were originally bred. Apparently, a genetic mutation that occurred in the 1950s resulted in a batch of kittens being born with the characteristic flat brachycephalic (AKA shortened head). Breeders preferred the look of these kittens and opted to use selective breeding means to achieve this look in future litters of Persian cats. Persian, Himalayan, and Burmese cats are the most recognized brachycephalic cat breeds, and the face many love comes with health concerns. It turns out that brachycephalic airway syndrome can cause breathing difficulties in cats (or dogs, like pugs, for example) that have shortened airways.

According to VCAHospitals.com, “Upper airway abnormalities that occur in this syndrome may include stenotic nostrils, elongated soft palate, hypoplastic trachea, and everted laryngeal saccules.”

Therefore, cats defined as “traditional” or “doll face” have sharper features. These Persian cats look much more like their ancestors. And ultimately healthier!

Himalayan Cat Fun Fact: They were labeled as Persian cats in a Siamese cat costume. Feel like you’ve seen a short-haired version of a Persian cat before? That’s because you probably have! If you’ve never seen Atchoum, you’re in for a treat. This Persian cat adopted in Quebec is a sight to behold. His human servant learned something shocking about him shortly after bringing him home. His new addition had a very rare congenital condition called hypertrichosis.

Hypertrichosis is also more commonly referred to as “werewolf syndrome”. *Note that this is NOT the same “werewolf” gene as the Lykoi cat.

However, due to this condition, her hair and nails grow continuously. So it’s a very good thing that his human is a licensed groomer! After sharing some of Atchoum’s images online, her fanbase quickly grew. It’s certainly easy to see why…he’s so cute! If you want to follow this adorable little wizard of a cat, follow him on Instagram or Facebook.

Fun fact about Persian cat behavior: Your counters and curtains are safe as these eloquent little beings purr not to jump or climb. So well brought up! Think Persian cats look familiar to Turkish Angora cats? That is why!

There is another breed of fluffy feline that arrived in Europe from the Mediterranean in the 1500s. The Turkish Ballerina Van is a lovely white feline with a soft, luxurious coat and a supple build. Over the years, the two breeds of cats have been crossed to improve the coat of Persian cats. But because of this, the Turkish Van almost disappeared. Luckily, the people of Turkey have established a breeding program for the declining cat breed with the country’s namesake. Their goal is to help keep these cats alive. Both cat breeds share similarities. But the ARE differences between which can be easily detected by the untrained eye. Persians have a stockier build, larger head, longer coat, and saucer-shaped eyes. While the Turkish Angora has a slender frame, pointier ears and a plume-like tail.

Do you have any other perfect facts to share with us about Persian cats? Leave us a comment !